Paddy Butcher - from Skiffle to Bof!

Paddy Butcher is a familiar face in the world of folk music and is often to be found in the folk clubs of East Anglia and beyond. A loyal 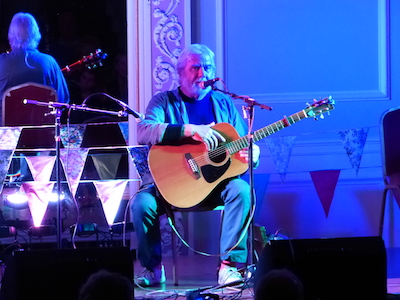 supporter of local music sessions, he brings a wealth of good quality songs and tunes and also a folksome gravitas that comes with modesty, humour and good cheer.

Skiffle music was Paddy’s inspiration in his teen years – a fan of Lonnie Donegan and Chris Barber - he even made a sawn-off tea chest bass for The Rebels an early skiffle band with friends. Although he started off taking piano lessons, Paddy moved on to the guitar and later joined the newly formed Bury St. Edmunds folk club in 1964 at what was then The Cricketers. The club hosted many top folk performers of the day and he became interested in traditional folk music starting Triad with Brian Francis and Bridget Danby. During his involvement with the club they booked Peter Bellamy and Paddy struck up a long-lasting friendship with the folk singer even once singing on stage with him at Cambridge folk festival. It was while Paddy was performing regularly on guitar doing traditional songs as a resident singer at the Bury club that he bought a melodeon and played with the short-lived St Edmundsbury Morris Men. Around this time he was also playing guitar with Geoff Singleton and Tony Preston in a band called Oakenshield.

Serious interest in the melodeon began during Paddy’s sojourn in London in the early 70s where, for a short while, he was MC and resident performer at the Shakespeare’s Head folk club in Carnaby Street. As well as appearing at other local South London clubs he danced with Blackheath Morris but Suffolk called and in 1973 he returned to help form Hageneth Morris Men and join John Goodluck’s band Trunkles. After this came The Suffolk Bell and Horseshoe Band with John and Katie Howson as well as being involved in the formation of Bury Fair Morris and playing trombone for The Haughley Hoofers.

It was when Bury Fair Morris side got invited to a local school to meet a French Dance group that a dance exchange to Angers was arranged. Paddy then embarked on a new phase in his folk music – he was inspired by a French band called Ellebore to take up the hurdy gurdy and started playing French tunes. After many festivals in France and elsewhere he eventually, in 1984, constructed his own instrument. This awesome building project was completed during a year under the watchful eye of gurdy guru Bill Molen (a player and a fine gurdy-maker). Having passed that one on he is now the proud owner of a second self-made hurdy-gurdy which is still going strong.  Shortly after 1984 Paddy formed Champetre playing gurdy, along with Bill and others in that band for many happy years.

His involvement in a band called RSVP started in the late 80s and continued until recent years. He has also been playing with Bof! since 2000 performing French and Breton dance music at many gigs in the UK and festivals in France. The Bury Folk Collective is proud to have this eminent folk artist and multi-instrumentalist as its patron and is fortunate enough to enjoy his performances at many local club events as well as the annual Bury Folk Festival at Nowton Park – he’s doing a gurdy workshop there this year. Paddy’s musicianship and warm stage presence continues to delight audiences in the region as he sings fine songs and plays guitar, melodeon, hurdy-gurdy, cajon, cas-cas and even occasionally, rumour has it, the trombone.