In anticipation of this years Plough Monday on 8th January and the Whittlesea Straw Bear on 13th January you may like to read this recently discovered account of a previous Plough Monday from a bygone age.  This year Old Glory Molly Dancers and Musicians will be performing at the Rumburgh Buck on 8th January.

There are a few articles which descibe Plough Monday including references in “Truculent Rustics” by Elaine Bradtke and “Molly Dancing in East Anglia” by Needham and Peck.  Articles by William Palmer, Russell Wortley and Cyril Papworth describe Plough Monday traditions in the Cambridgeshire villages of Little Downham, Littleport and Balsham, amongst others.  Unfortunately I could find few historical references to Plough Monday traditions in Suffolk, indeed one authority on the subject, Peter Millington, states in a comprehensive paper called “The Origins of Plough Monday” that “Norfolk and Suffolk are almost devoid of Plough Monday records".  So I began a diligent search of the internet and came across this article which seems to come from a late Victorian account of an event in Rumburgh.  Unfortunately, as we know, Google is an unreliable source so I cannot vouch for the authenticity of the following report.

The Land of the Saints has a Dark Side

“On 13th January this publication received an alarming report from several eye witnesses of a disturbing event which occurred the previous evening, the first Monday after Epiphany, which some call Plough Monday.  The incident took place in the depths of East Suffolk in the area known as The Saints; but this was no Christian ceremony and some said it was ungodly and pagan mischief.  We are persuaded that an authentic account of that affair will not be unacceptable to the public.  The principle witness, who wished to remain anonymous, has asked to be simply known as “The Apprentice”.

“The disturbance occurred during the hours of darkness near the village of Rumburgh.  There were no warnings but there were reports of strange lights seen in the Western skies and a report of a low booming which some claimed as distant thunder but as it was a clear, dry evening this was disputed.  The lights and noise caused a crowd of anxious villagers to gather on the village outskirts and around The Buck Public House.  The lights could now be identified as flaming torches and as they approached the village “The Apprentice” reported that he saw a heavy plough being dragged into the village by a menacing group of dissolute ruffians, their identities concealed by blackened faces.

“No word was spoken until they arrived at The Buck where a cry went up from their apparent leader who bellowed, “Only once a year, a Penny for the Ploughboys”!  This may have been said to excuse the disturbance but it appeared to reassure some present and the crowd parted and allowed the plough to enter the pub yard. 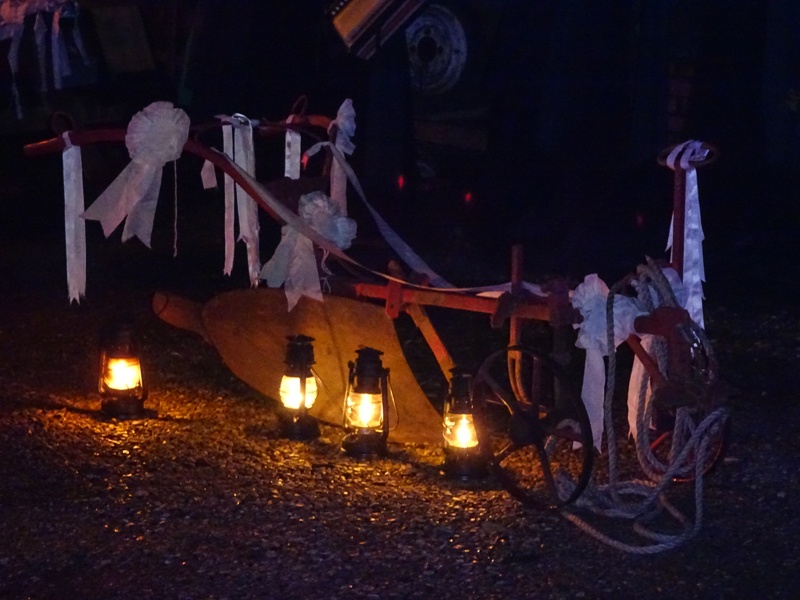 The men were accompanied by a dark band of travelling musicians with herbaceous headdresses and primitive instruments who struck up a deep and earthy sound presaging the next stage of the proceedings which appeared to be part of a very strict and particular pagan ritual.  Some of the men seized hold of each other and began a series of muscular movements, turning and twisting, pulling and shoving each other giving no quarter.    The rough-music coming from this rustic orchestra which caused the men to twist and spin was like no music heard in respectable company and was more akin to the terrifying cries of beasts enduring agonising torments in the dark night.

Some said there were women amongst these rural vagabonds and a witness said she had seen a lady with the dancing men but another disagreed and said “that were no Lady; she had whiskers under her bonnet”.  Others said they were sure it was a woman and said they’d heard her called “Bessy”.  Another said “if they was women they all looked as though they’d been dragged through a hedge back’uds”.  One witness said he could confirm that there were indeed women amongst the gang and some of them had scrubbed up quite nicely but there were no frills.

At one point the crowd was intimidated into drinking a strange potion.  Many protested that they were determined to have a “dry January” but these cries were to no avail and the threatening presence of the men, emboldened by their disguise, induced many in the crowd to swallow the foul brew which some claimed had a strange gingerish after-taste.  A collecting box was taken around the crowd and, perhaps as a result of drinking the gingerish brew, many felt obliged to provide the “penny for the Ploughboys” demanded by the ruffians.

If readers hear of any plans for similar disorder and dissolute behaviour they are advised to stay indoors and contact the appropriate authorities.