“Me pals were all agog at the kit of the mollies, misfits and glorious champions hailing from Good Easter to the Washes and who got the blood racing on the Mark Jones Day of Dance in January.”

How many references to Molly sides can you find in the above sentence?  Contrived I know, but somewhere you will find references to all the molly sides who were dancing on that day.  No prizes for getting them all right.

Some years ago Cotswold Morris and Molly dancer Mark Jones tragically lost his life in a car accident and this Day of Dance, organised by Ouse Washes Molly Dancers in and around Ely, is regularly held in his memory.  With Ouse Washes, gathering to mark the occasion were Gog Magog, Good Easter Molly Gang, Kit Witches, Mepal Molly, Misfits, Old Glory, Oxblood and Seven Champions – Molly dancers all.  One of Mark’s favourite songs was “Rolling Home” and at the first stop this was the music for a massed molly dance “Birds a Building”. 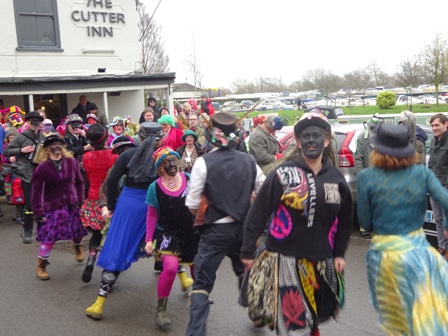 Molly is a style of dance historically done by Fenland farm workers to earn or extort money during the winter when there was little work.  Since there was a need to keep their identities secret, they would black their faces with soot.  Unlike Cotswold Morris, written records of Molly dances are sparse, so revivalist Molly sides have largely had to make up their dances using what little information is available about steps, figures and characters, but generally speaking they have a high stepping style with precise turns and have kept the blackface disguise.   I’ve not been to a day of dance devoted solely to Molly dancing before and after experiencing a Border Morris day where kits and dances were all broadly similar, I was not optimistic.  I was pleasantly surprised though as Molly dancing appears to run the gamut from extremely disciplined to frankly chaotic while the kits range from tweedy rustic through to grotesque!

At the disciplined end of the scale Old Glory and Seven Champions (from Kent) have a similar style: heavy, hobnailed, unsmiling and blacked up, though Seven Champions’ disguise is now modified from full to half face.  The dancing of both sides is very powerful with a strong emphasis on drama, but a special mention must go to Seven Champions’ wonderful unaccompanied female singers who, with such numbers as “Byker Hill” and “Fever”, provide the music for the dance while the dancers’ boots provide the rhythm.  More often than not this means that the audience has to fall quiet and pay close attention adding to the sense of theatre – appropriate as Seven Champions started as a Mumming group.  Likewise, Old Glory’s musicians, again all female, are fully integrated members of the side with their green and black kit and their enormous headdresses of trailing ivy. 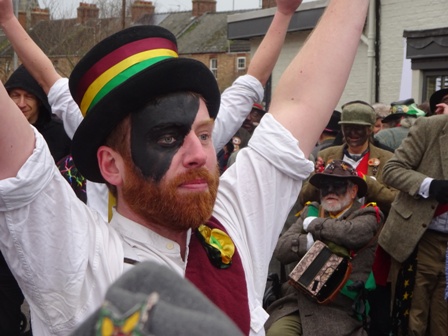 The hosts, Ouse Washes, along with Gog Magog, Kit Witches, Misfits and Oxblood are much more colourful, having either raided the charity shops for miles around or made multicoloured patchwork outfits as part of their disguise; all their dancing is energetic.  The Kit Witches though seem to have taken the pantomime dame as their inspiration and the enormous balloons wandering about in the bodices of men and women alike are rather distracting.  I remember that as a result of our side dancing in Charlie Manning’s Amusement Park in the 1970s, we were told that we had brought Morris dancing into disrepute.  What would that person have said about the Kit Witches?  If you can rise above the wigs, dame make up and balloons though (the balloons are certainly rising and trying to escape in any way they can) they are good dancers and they do seem to enjoy their dancing.

They and the fun, rainbow-coloured outfits of Gog Magog, Ouse Washes and Oxblood Molly brightened up a very overcast and subsequently wet day; only to be expected in January I suppose.  Appropriately enough, given the face make up, the Misfits did one of their dances to the Rolling Stones’ “Paint it Black”.  This set us fantasising about a whole molly dance set built around such numbers as “Black is Black”, “Back to Black”, “Black Magic”, “Black Night” etc.  You can probably think of lots of others.

In the fashion stakes, with their various permutations of tweed jackets and coats, flat caps and shapeless hats, waistcoats and corduroy trousers in subdued colours and with string round the knees (those fenland rats will shin up anything), Good Easter, Old Glory and Mepal Molly fall into the category of tweedy rustic.  Old Glory and Good Easter also keep the tradition of the Lord and Lady characters who lead the dancing.  I’ve referred to the pantomime style of the Kit Witches, but although both Old Glory’s and Good Easter’s Lady characters are obviously played by men (real beards in evidence) they are much more serious, mysterious figures; there is no element of burlesque and perhaps this might prompt the audience to ask about the origins of the tradition which is no bad thing. 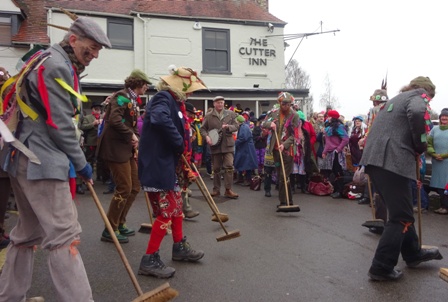 Mepal Molly possibly the worst folk dance side in the country!

Described by Dancing England as the “worst folk dance side in the country”, Mepal Molly’s dancing is in a class of its own!  They uphold their appalling standard with pride by never practising, dancing out rarely and apparently making up their routines on the spur of the moment as they are happening.  This only works at all (as far as it can be said to work) because some very accomplished and experienced dancers from other sides moonlight as Mepal Molly Men.  Even so, the result is (only vaguely) organised chaos and very funny.

A clip of Mark Jones in action leading the Dance of the Fire Irons in 2005 may be seen at https://youtu.be/KlM4v6yoUlI (This dance is normally done at the Survivors' Party marking the end of the Rochester Sweeps Festival.)  All in all, January's event was a very fitting tribute to a fine dancer.  I only knew him by sight, but I think that Mark Jones would have enjoyed his day.