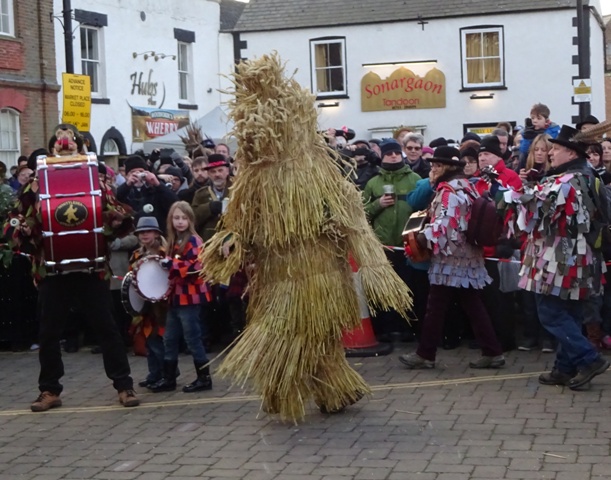 Newspaper accounts of similar events continued until at least 1893 when a Mrs Edwards remembers her father being chosen to be the straw bear and seeing him bound with oat straw from head to foot.  She recalls that the Straw Bear and Molly Dancers came from Ramsey and Walton (south of Ramsey) on Christmas Eve, but “the dancers cou’n’t be everywhere at once on one day, so they used to go about on any other special day to make up for it … from pub to pub and … any houses or cottages where they stood a chance o’ getting anything”.  They were really interested in getting money but doubtless accepted food, mulled wine or beer.

In Whittlesea a 1882 newspaper records that on Straw Bear Tuesday or Straw Bower Day (just after Plough Monday) a man was dressed in straw and led dancing through the town “to entertain by his frantic and clumsy gestures the good folk who had on the previous day subscribed to the rustics, a spread of beer, tobacco and beef”.  Regrettably, in 1909 an over enthusiastic Policeman decided that he would enforce the 1824 Vagrancy Act which outlawed “cadging” for subsistence and the Whittlesea customs were stopped.

Whittlesea’s German twin town, Walldurn, like many other European towns, also has a straw bear custom.  The attendants of their straw bear are dressed in harlequin costume and can sometimes be seen amongst the crowds at Whittlesea.  In Wurmlingen in 1852 the tradition incorporated the begging aspect of Plough Monday and other European festivals involve dressing up as wild men, other animals or in actual bearskins simulating the bears emerging from hibernation.

The Straw Bear tradition was revived in Whittlesea in 1980 and is now a weekend festival which this year celebrated its 40th Anniversary. 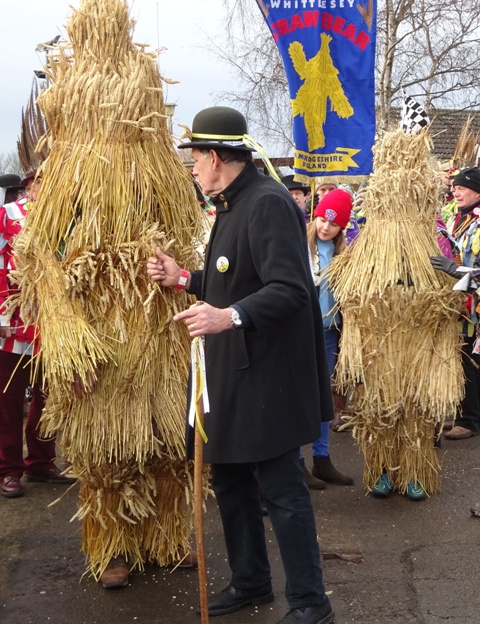 The 2019 Straw Bear begins his tour of Whittlesea