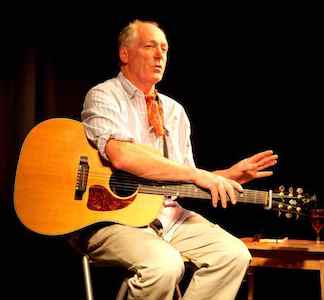 WHAT I DO
I write and sing songs about the way we live now, and play them on the guitar or ukulele. I have performed shows of songs and stories at venues from the Hay Festival to the Edinburgh Fringe, from from folk clubs to London’s Crazy Coqs cabaret bar.

I have also written, presented and played in Taboo-Be-Do!, a two-part BBC Radio 4 documentary about politically incorrect songs, and once gave a performance of Noel Coward’s ‘There Are Bad Times Just Around the Corner’ for The World At One.

‘Illuminating and enjoyable. There’s a pleasing bite behind the melodies.’
Alice Jones, Independent

I CAN OFFER
Performances (30-90 minutes) for concert venues, folk clubs and festivals
Literary festivals – I am also a professional author
House concerts and private functions.

CONTACT
Email -  This email address is being protected from spambots. You need JavaScript enabled to view it.
Telephone - 01379 742 772
Website - www.terenceblacker.com