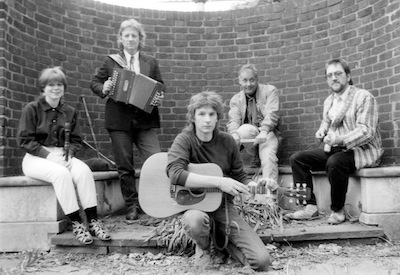 Sometimes, especially if it took callers a long time to force the dancers on to the floor or to explain the dance moves, we band members would sit staring into space and thinking about other things we could be doing. I'd often wonder, "Is it nearly over?"  I'd look at my watch and almost invariably - I kid you not - it was 8.40, Twenty-to-nine. This happened so regularly that, during our enforced breaks, I'd turn off my microphone and make up new tunes. I called the first such tune, Twenty-to-nine. We played it regularly and recorded it on our second album Bassland, and in fact we still play it today, 30 years later, in The Hosepipe Band.

So, if you play regular gigs, feel a bit bored and wonder what the time is, check your watch. It may be twenty-to-nine. Here's the tune played by Bass Instincts - it's the second tune of this set. The first is Gypsy Lullaby and the third is Serpentiner Och Konfetti, a tune we got from the Swedish band Groupa.