Clodagh Chapman who was an original member of Bury Fair (founded in 1977, but originally part of Hageneth Morris) and a founder member of the Haughley Hoofers died in June.  Her funeral will be at the Bury St Edmunds Crematorium in Risby at 9am on Monday 2nd July 2018.  Colourful clothes and Morris kit should be worn to celebrate her 95years. 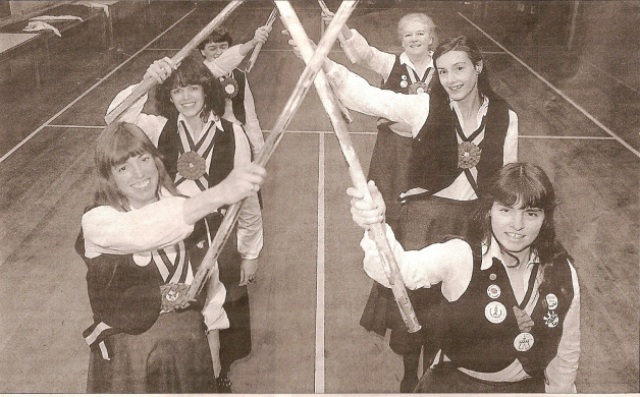 I have known Clodagh since her days with Bury Fair and in 2014 I wrote the piece below for the Mardles Magazine and re-publish it today in her memory.  She is the only person I know who created a dance and an embryonic “tradition”.  Like many new dances some worked and some didn’t but Clodagh had one big “hit”; Fires of August which is still being danced today by people who have never heard of Clodagh Chapman.  The Suffolk Weaver is still also danced by Bury Fair but has not been picked up by other sides as much.

I saw “Fires of August” (in the “Buxhall tradition”) performed four days after she died, not in her memory; no-one dancing it knew she had died.  It was danced because it is a good dance (a bit like Brighton Camp, Stanton Harcourt) and can be made into an entertaining race between musicians and dancers.  Few who dance it will know that it was written by Clodagh in the 1980s.  It was originally performed by Bury Fair but has migrated to Little Egypt Morris Men and Westrafelda and maybe others besides.  Hageneth practiced it and I remember performing it once on the Angel Hill in Bury St Edmunds.  Unfortunately we never mastered it and it disappeared from our programme.  You really need to go to the Little Egypt summer solstice event to see it danced with enthusiasm and at a pace which always impresses the audience.

I met Clodagh in September 2014 and she described how, in the 1980s, with the support of Sally Green as Foreman and the rest of Bury Fair she had devised 3 new “Cotswold” dances.  Clodagh, a published author of crime novels and children’s fiction, lives in Buxhall and her dances have become known collectively as “The Buxhall” tradition, one of which had, in Barry Care’s word, “escaped” and is now danced by The Morris Men of Little Egypt as well as Bury Fair.

Clodagh explained that “Bury Fair had been going for quite a few years before we branched out and started arranging things ourselves; but it was fairly early on”.  For the first couple of years, before they got their own separate identities Bury Fair and Hageneth practiced together as "Hageneth Morris" and “we’d been taught lots of dances by Dave Burt but we had whittled them down to a few traditions which we thought we were better at.  Not too much high leaping about because women aren’t so good at that; just trying to select the things that were suitable.  We specialised in Adderbury and Fieldtown and that was vaguely the tradition I based my dances on”.

This was the first dance that Clodagh created and she remembered devising it on the way home from a trip to Carlisle with Gayle Wade in the early 1980s but could not remember why she had been up there. “I remember coming back to Suffolk on the train and had the tune the Suffolk Weaver going round in my head and I thought it would be the perfect tune to dance to and it would be rather fun to make up a dance.  The tune comes first.  I had been playing it for years, most people know it; it’s a Suffolk song.  We called the dance the Suffolk Weaver – a handkerchief dance, low held handkerchiefs.  It’s a very easy dance with a sort of shuttle figure going backwards and forwards in the hey to represent the weaving movement”.

Although Clodagh had said the tune was well known I didn’t recognise it or the song so I Googled it and could find nothing.  I contacted Gayle Wade to see if she could remember the reason for the trip to Carlisle or the tune the “Suffolk Weaver”.  Gayle hummed the tune to herself and quickly remembered that it was actually the “Foggy, Foggy Dew”, which had been a popular Burl Ives song and has as its first line; "When I was a bachelor I lived all alone, I worked at the weaver’s trade".  There may also be a version called the Suffolk Weaver but I couldn’t find it.  Please let me know if you know it.

Clodagh then devised a stick dance called “Fires of August”.  “Unless you are of a certain age you’ve no idea why it’s “Fires of August”; but that was when they burnt the stubble.” The dance developed from an idea Clodagh got from “a silly little poem which was part of a story I was writing at the time about a crime that was covered up by stubble burning – hence the Fires of August – the story never came to anything - the only thing left is the dance”.

Fires of August  has some complicated long stick work involving overhead clashing and turning which reminds me of Brighton Camp (Stanton Harcourt) but Clodagh is clear that; “The sticking refers to the title and the dancers are beating out the stubble fires”.   Clodagh recalled some advice she received about stick clashing which many dancers would do well to remember, “I was taken aside and given a lesson in sticking by Dave Burt, he said you don’t follow through – you “bounce” off your partners stick – if you follow through someone will get hurt but not if you bounce”.

Clodagh has not seen Bury Fair dance for several years and asked, “Do they still use the tune I made up?”  Clodagh devised an original tune and “plucked up courage to play the tune at a little Morris competition at a Folk weekend in Aldershot.  Paddy (Butcher) won the competition playing one of his own tunes”.  Clodagh described the event as “very proper, we were all very pleased and afterwards someone came up to me and said “I did like that tune of yours, it made a lot of very little material”; just enough to suit a new dance”.

“I worked out the tune, a fiddly little tune and then the movements came later.  I have a theory that that’s how they did it, they evolve, but the tune comes first, they give you the rhythm.  The dances often have a little song, don’t they, like Old Woman Tossed Up, Oh Dear Mother What a Fool I’ve Been, Post Man’s Knock.  They were songs or ballads or nursery rhymes; popular tunes of the day, marching tunes”.

Bury Fair taught the dance to Belchamp Morris Men when “the coach broke down on our way back from France and we had a long wait for a spare part to be brought out from the factory”.  Subsequently Belchamp MM passed it on to Little Egypt.

The third dance in the tradition, Sellingers Round, uses an Elizabethan tune (William Byrd 1540 – 1623) and Playford dance http://www.youtube.com/watch?v=jAE1bKMykKU which Clodagh adapted for “Fieldtown type stepping.  The figures too are what Fieldtown figures are.  We worked (it) out so that the set turns, so you need 4 musicians so it’s not terribly easy to stage unless the musician walks round each time”.  There’s quite a lot of “headwork” in Morris, a lot of detail – you can easily go in the wrong way and bump into someone if you are not concentrating; it’s not just skipping around waving handkerchiefs it’s a lot more complicated”. 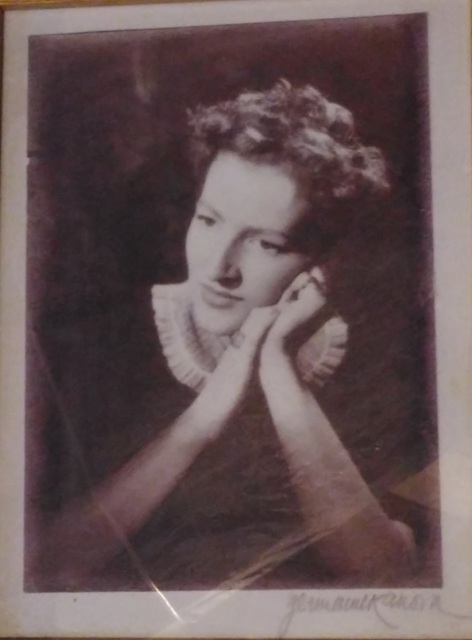 Clodagh Chapman aged 22 in 1945 (photo from authors own collection)

Clodagh wouldn’t claim to have lessons for other sides but she has shown how new dances can be inspired.  My side, Hageneth, have only devised one new dance, Speed the Plough but some other sides have created many of the dances they perform.  This is inevitable for most Border and Molly sides as there is so little recorded.  Most Cotswold sides perform the dances in the “Black Book” but locally Golden Star have created some new versions of traditional dances and a few years ago I remember seeing Morris Offspring creating completely new Cotswold style dances which had the kind of figures often only seen in Border dances.

In my view Cotswold sides should be braver in creating their own dances, in keeping with the traditions they enjoy dancing, but which also have a few novel features to keep audiences and dancers interested.