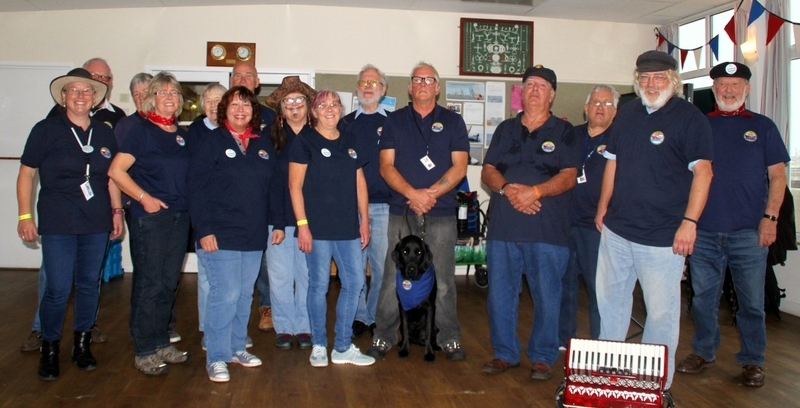 From its small beginnings in 2006, the Harwich International Shanty Festival has expanded to become the second largest shanty festival in the UK, filling the old town of Harwich, with its rich maritime history, with song, music and nautical entertainment for thirteen years.  This year’s festival took place on the 5th, 6th and 7th October and featured 204 events, 30 ticketed, 174 free!  Over 5000 festival goers were in town for the weekend, and 37 artists, old and new, were included in the programme, with many from the UK and seven coming from abroad – from Ireland, Russia, Spain, France, Belgium and the Netherlands.

Back by popular demand were El Pony Pisador from Barcelona with their vibrant, exciting and varied performances, Nordet from Lorient in Brittany who perform at many maritime festivals in the world and Men Overboard from St. Petersburg, Russia whose original performances combine a mixture of traditional sea songs and shanties, including some Russian versions.  Other top acts included The Exmouth Shanty Men whose entertaining act includes drama and costume and The Norfolk Broads, a 4 piece all female group singing in close harmony.

The workshops this year included a “Singing in Public” workshop for beginners and “Harmony Singing” for those with a little more experience and a ‘Squeeze, scrape and blow’ workshop for instruments, learning to play salty tunes with a nautical theme.  The popular Bones Workshops were back, with “Dutch Uncle”, Hans Weehuizen instructing participants in playing this traditional maritime percussion instrument and running schools workshops for children. There were talks on Thames Sailing Barges and Sail Making, Britain’s Lighthouses, Harwich Ships in World War One and more.

On a crafty theme, ‘Being a Pirate’ gave you the chance to come along and make your own fabulous pirate hat and the Children’s Shanty Workshop included face painting, badge making and tattoos..

We had an exciting programme of events happening at the Redoubt Napoleonic Fort including musket drills, cannon firing and skirmishes with River Rogues Pirates and the King’s German Artillery.  A Barber Surgeon demonstrated his grisly skills, and Black Dog the Pirate was there with a chest full of treasure!  There was also figurehead carving by Andy Peters, Ropework Crafts, and Kipperland  – demonstrations of freshly smoked kippers with an opportunity to buy.

An attraction for all the family were the two Sea Shanty Trains running between Harwich and Manningtree and back on Saturday morning with pirates and shanty singers.  Car parking was available in the Trinity House car park and there was a Shanty Bus to transport people around the town.  Motorhomes and caravans were able to stay overnight on Harwich Green for the three nights of the Festival.

Join us for next year’s festival which will take place on the 11th, 12th and 13th October 2019!  The guest list is nearly full already with artists from all over the UK and around the world including Canada, Denmark, Germany and France.  Check our website for details. www.harwichshantyfestival.co.uk

Article by Debbie Jones
Festival Press Officer
Email:  This email address is being protected from spambots. You need JavaScript enabled to view it.