ALL MY LIFE'S BURIED HERE tells the story of George Butterworth's life and music from his earliest childhood to his final hours in the violent confusion of the trenches.

For the first time in a documentary film, here is the compelling story of the English composer, George Butterworth who met a tragic end on The Somme in 1916. He left behind a handful of still popular works such as 'The Banks of Green Willow' and 'Rhapsody, A Shropshire Lad', and an impressive collection of traditional songs and dances.

It follows Butterworth on his forays collecting folk songs to discover what he found when he went out into rural England and how this informed his own music. We discover why Butterworth once described himself as a 'professional morris dancer', and explore what led him to destroy so many of his own compositions before he died.

Tracing his journey to its tragic conclusion we go with Butterworth into the trenches of northern France where his participation in increasingly desperate battles on The Somme ultimately cost him his life.

This is a dementia friendly screening and is supported by Diss Cyclathon.

For a link to an earlier article about Butterworth on Mardles.org with photos of him as a Morris dancer with Cecil Sharp’s demonstration team follow the link;

The Dancing Out Season Starts Soon

As the "Beast from the East" goes back home (Russia is suspected!) and we are promised warm weather next week here's a timely reminder from Giles that the Morris dancing summer season will be starting soon.  Hageneth and loads of other sides will be at Hundon, near Haverhill, for the 10th anniversary of the Belchamp MM event on 22nd April.

Let's hope it's not raining; remember, "it never rains on the Morris!" 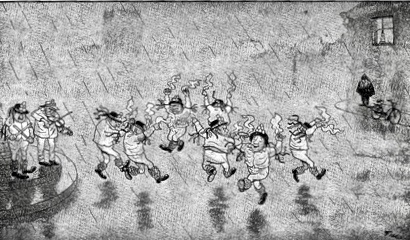 Dave Evans - with thanks to Brian Francis of Hageneth who found this old Giles cartoon, probably from The Daily Express

HOLT RIDGE MORRIS (Mixed Cotswold) have moved and now (12th April 2018) practice on a Monday evening (8-10pm) at Marsham Village Hall except on the second Monday of the month when they can be found at Aylesham Village Hall. Contact: Mick Selvey 01953 882453 or email This email address is being protected from spambots. You need JavaScript enabled to view it.

Halesworth Day of Dance; Oxblood tames the mini Beast from the East 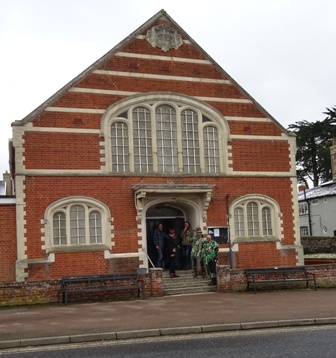 Congratulations to Oxblood Molly for planning ahead and managing to put on a successful day of dance despite the return of snow and below zero temperatures.  Oxblood correctly anticipated that nobody would want to dance outside, especially as there would be no audience.  At the last minute they managed to book a warm indoor venue and the 14 sides that braved the weather were rewarded with dancing in the warmth of the Rifle Hall in Halesworth.  10 sides had to drop out as the snow had made some roads in Essex impassable.

Weavers Morris - All Up 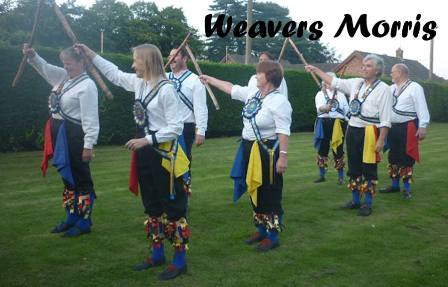 Mick Wade of Weavers Morris contacted Mardles to let us know that "due to membership problems" Weavers Morris a mixed Cotswold side based in North Walsham has decided to wind-up.  They were founded in 1995 and have been regular visitors to the famous Lobster Pottie festival in Sheringham.  They had an active programme until last year and danced at various village events in North Norfolk, including the Mundesley Lifeboat Day.  They have been good fund-raisers for local charities including for "Nelson's Journey" which supports children and young people that have experienced the death of a significant person in their life.  As far as is known no collection has been organised for Weavers Morris!