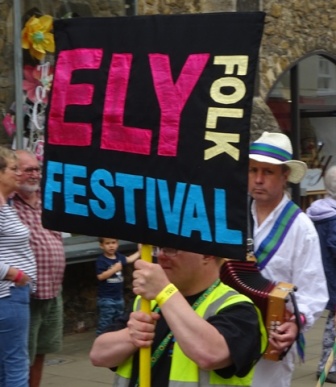 Last year 6 Hageneth men danced at Ely Folk Festival. It was a pretty close thing. Minutes before we were due to dance we only had 5 men and no musician. A sixth man arrived in time and we borrowed musicians from Bury Fair and Coton. Our musician arrived in time for the second dance.

This year Hageneth did not have a side but Gill’s side, Haughley Hoofers, were booked to dance at Ely on the Sunday and Gill and I decided to camp for the weekend.

It’s a great festival site at the sports ground; there’s plenty of room for tents and campervans all within 3 minutes walk of the main festival site.  There is also a regular and fairly frequent shuttle-bus into town provided by an alternating mix of large mini-buses and a double-decker bus.  The shuttle-bus system usually works well in both directions but occasionally there is a frustrating delay, sometimes when a side is due to appear at the festival dance stage.  The priority is to get all sides into the City centre on Saturday morning for the impressive parade of the festival dance sides which makes its noisy and colourful way from Ely Cathedral through the centre of the City, around the market square and back to the cathedral.

This year, as last, the weather was perfect; sunny enough to get the crowds out but not too hot for the dancers.  Westrefelda from East Suffolk had the honour of leading the parade.  Bringing up the rear we were treated to the noise and dark intimidating presence of The Witchmen and their marvellous swaying musicians. 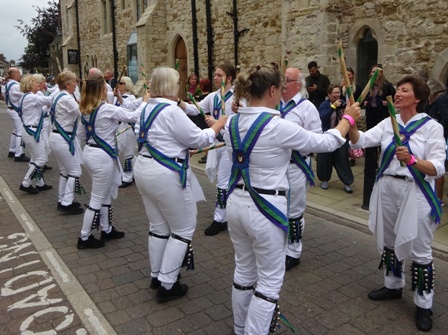 Westrafelda had the honour of leading the  parade 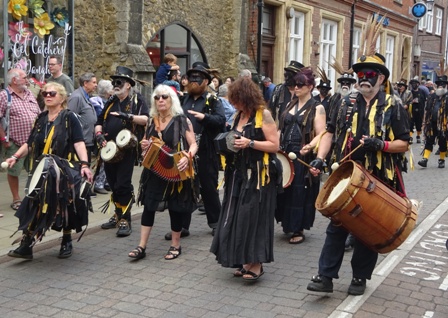 Saving the best 'till last? Witchmen bring up the rear in the Parade

Westrefelda, a mixed side both by gender and age, led the procession in a confident and well-drilled manner and showed the benefits of having a demanding leader and were smartly turned out and added some good shapes and novel features to traditional Cotswold Morris dances.

All sides have an opportunity to dance in the City on Saturday and Sunday and also perform in the festival arena on a simple “stage” which is basically large boards held together underneath with wooden battens.  It doesn’t sound like much but it is larger, safer and more robust than the ones used at FolkEast.

There were a total of 12 sides in the parade on Saturday plus another seven on the Sunday so there was plenty of Morris to see.  I didn’t see all of the sides, especially on the Sunday as I banged the drum for the Haughley Hoofers.  Most of what I did see was of a pretty good standard and, in my opinion, some of it exceptionally good, but there was also some pretty ragged stuff.  You may think I am clumsily implying that the rag-jacketed Border sides were disappointing but this is not my intention, however, I do know what I like and sides which lack discipline and consistency in style and poorly execute what they put on in public do not impress.  If modern Morris really is "street theatre", as Mike Garland of East Suffolk MM argues, then sides must have a "Director".  That may be a cohesive, collective leadership or a strong Squire or Foreman who determines and enforces a club style but it is noticeable that sides with strong leadership can be successful in maintaining performance standards. 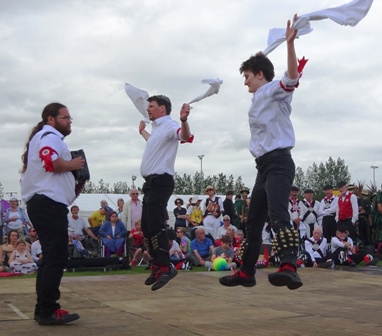 Nonesuch Morris impress with a jig on the festival stageThe problems of low standards of dance, partly the result of more and more ageing sides was a theme of several conversations over the weekend, perhaps because my own Cotswold side, Hageneth have struggled to get six fit men together all season and as a result may join the list of departed sides

The contrast with old man dancing was vibrantly shown by the performances of Nonesuch Morris a mixed Cotswold side from Bristol. They only had six dancers and one musician but always performed with energy and imagination.   They performed dances of their own creation in the style of Bucknell and some Raglan dances for 6, 4 and 3 dancers showing what can be done with only the bare minimum available.   They had the advantage of being young and enthusiastic and demonstrated that Morris is most impressive when the dancers are well led and have developed a disciplined and consistent style of their own and succeed in leaping high off the ground. 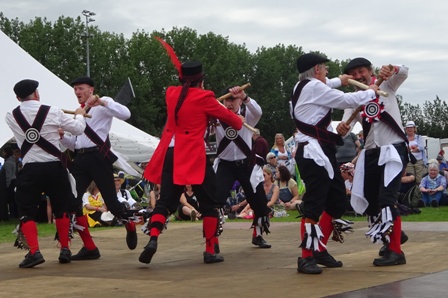 Great Yorkshire Morris live up to their name as they perform the Upton Stick DanceLots of sides, including Hageneth, start out like this but all then face the challenge of what to do as the side becomes longer in the tooth, wider in the girth and is less able to impress with their athleticism and vigour.  Some sides disappear from the Morris map at this point but Great Yorkshire Morris have found a solution to this; create a new side from the remnants of several sides which are about to fold due to lack of members.   They come from the delightfully named Pool in Wharfedale, near Otley, West Yorkshire and were founded in 2005 and became members of the Morris Ring in 2009 and although they are mainly older dancers they include some younger members who have recently joined and learned the Cotswold dances during this winter.They danced well and their new recruit did not look out of place amongst the experienced men.  They looked good in a simple black and white kit brightened-up by red socks.  They also have a red–coated fool who engaged well with the audience.

It was good to see Rockingham Rapper, also a young side, still performing their high-speed complex weaves and tumbles.  They have also succeeded in introducing some new dancers who have lots of experience with other sides. 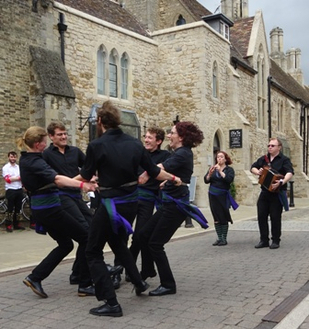 Rockingham Rapper go for a spin in the High Street 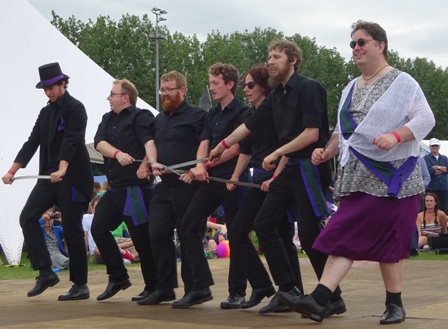 Rockingham Rapper introduce some new dancers on the festival stage 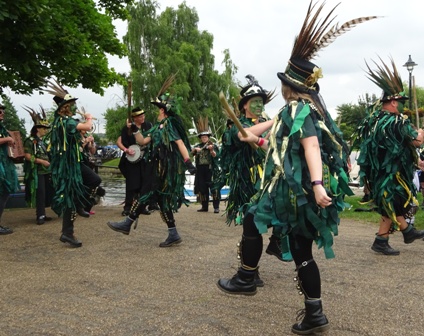 Sutton Masque at the river-sideSutton Masque and Green Dragon were also out in force on the Saturday and demonstrated some excellent vigorous and enthusiastic border dancing.  Whooping and hollering seems to be an essential part of Border Morris and some sides, like these, manage to do it in a convincing manner appropriate to the dance.  In my view it is definitely a case of “less is more”; random and frequent shouting and shrieking by individual dancers is less impressive than a well-timed whoop by the whole side.

Green Dragon had an encouraging mix of experienced and younger dancers, including one very young one, and others not all of whom were children of other side members.

Any East Anglian Border side is going to find itself compared to the wild Witchmen of Kettering and their fabulous band of musicians.  It’s amazing what an impressive sound they can get from one melodeon and a concertina plus of course the splendid percussion section of drums and shakers.  At times they achieve an infectious reggae-like sound which is as good to watch and listen to as the dancers are. 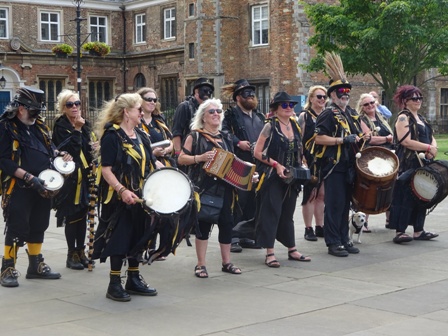 The Witchmen Band outside Ely Cathedral 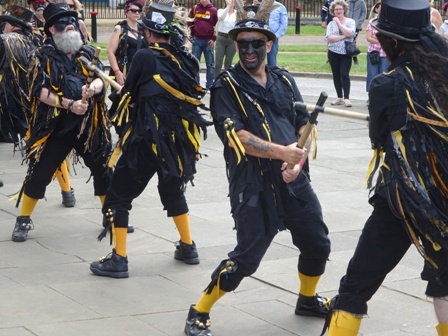 The Witchmen Banned?  They perform Brimfield aka "Willy Wacking"The Witchmen are enthusiastic, aggressive and also rude!  They manage to pull it off, if you’ll excuse the pun, in a way which does not embarrass them or offend the audience which I can tell you is quite an achievement.

All in all, I enjoyed the dancing at Ely; it’s a great little festival and has a growing reputation amongst dance sides, demonstrated by the fact that most of them asked to come even, those from Bristol and West Yorkshire!  Whether or not Hageneth will ever re-appear at the Festival remains to be decided at this year's AGM.