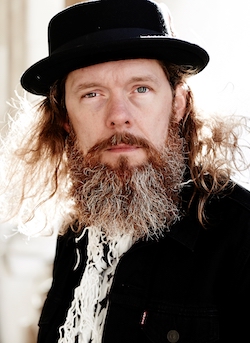 Mike RossPASSIONATE and intoxicating American and Southern rock singer Mike - one of the big hits of this year's successful Blues at the Barns festival - returns to the area in September for a rare solo show. Ross, whose music was described by Mojo magazine as "...a fuzzed up, fierce and full frontal fiery attack coupled with sexy, smooth slidin', southern soul" , stormed the May festival with his band, but will be playing a solo acoustic show in the Long Room at the Blue Boar, Maldon, on Friday September 13. Promoter Tim Aves said: "We're getting a  lot of interest in this show and I'm not surprised. We're really excited to have Mike playing a solo acoustic show for us at the Blue Boar. It's not something he does all that often, but in the wonderful, intimate surroundings of the Long Room I reckon he'll be absolutely mesmerising."

Ross has been widely acclaimed for his soul-wrenching songs that lead audiences from England to Europe to New York, detouring way down south to Memphis and New Orleans via Clarksdale, Mississippi, and Nashville Tennessee, soaking up every scent and sound along the way.  His shows are describe as "a uniquely detailed and image packed tour of the history of the music he loves to play, with influences taken from the whole range of 20/21st century American music - beginning in the Mississippi Delta and ending up right back in the present - carried by a powerful voice and intoxicating virtuoso guitar-playing. To experience Ross solo or with his band egging him on is to see why one reviewer declared him "burnt in blues & soaked in soul".

The gig is in the Long Room, upstairs at the Blue Boar, in Silver Street, Maldon, on Friday, September 13. Doors open at 8.30pm with the music expected to start at about 9pm. Admission is £10. The venue has a limited capacity but places at the show can be reserved in advance by emailing timaves1@gmail or calling 07979 601197.

For more information about Mike Ross, along with video and audio clips, visit www.mikerossmusic.co.uk