Some Mardles readers may remember Mary Moore who died recently. She was a regular at Suffolk sessions including the one at the Kettleburgh Chequers 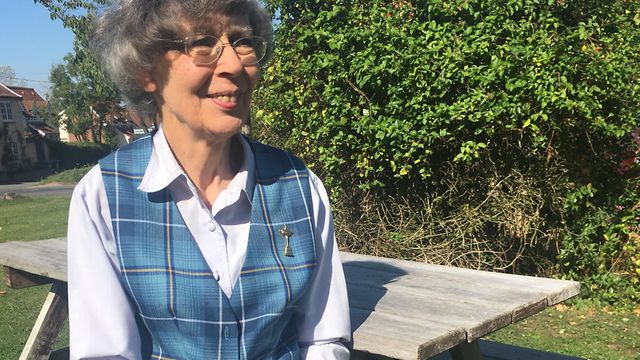 MARY MOORE, the Suffolk-based granddaughter of golf legend Samuel Ryder, and creator of dozens of beautiful village signs in the county, has died at the
age of 86. Mrs Moore, who lived at Brandeston, near Framlingham, was President of the Samuel Ryder Foundation, created in memory of the man who founded the Ryder Cup - now one of the sporting world’s most prestigious tournaments. Paying tribute to Mrs Moore, the Foundation described her as “a wonderful person, and a very proud and passionate supporter of her grandfather’s legacy. She attended seven Ryder Cups, home and away.

“She was a huge advocate of Samuel Ryder’s ethos and belief in the power of the game, and the enjoyment that it brought to so many people.” Interviewed by the EADT in 2019, Mrs Moore said her grandfather died only a couple of years after she was born. “So he knew me as a baby, but I don’t remember him.” Mrs Moore said she loved attending the Ryder Cups, where the Ryder party, usually numbering six or seven, were able to mingle with celebrity guests. She named Colin Montgomerie as her favourite player “because he spoke so politely and pleasantly to me”. Samuel Ryder initially created the Ryder Cup to give golf a higher profile. At the time, in the 1920s, it was something of a poor relationship compared to sports like tennis.

Mrs Moore wasn’t sure what her grandfather would have made of the huge sporting phenomenon his tournament has become. She said: “He would be astounded. Whether he would be happy with the scale of it now, I’m not sure. He never visualised this.” After attending art school, Mary married Hector Moore, a blacksmith, farrier and metalworker, who lived and worked at Brandeston. The couple were together for 44 years until Hector’s death in 1999. The Moores became well known locally for creating some 50 ornate village signs throughout Suffolk and also in neighbouring counties. Mary used her artistic talent to design the signs, including features from each village, and Hector employed his metalwork skills to create them. Mrs Moore was also a talented singer and musician, often taking part in local performances.