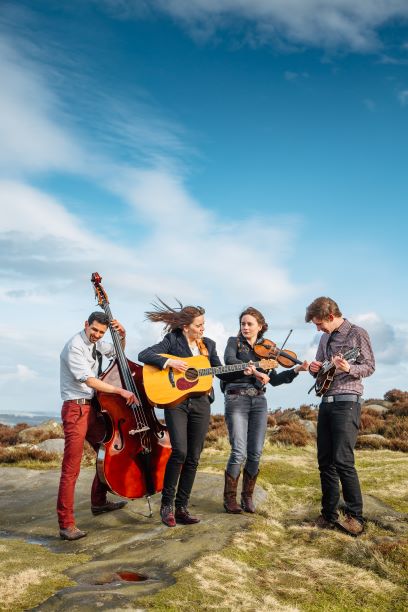 All four musicians have their musical roots in bluegrass but their collective influences reach much further and this shows in their music. Formed in late 2013 in Bath, England, the band features the sibling harmonies of Charlotte and Laura Carrivick (the Carrivick Sisters) on guitar/vocals and fiddle/vocals respectively, the extraordinary talents of young mandolin player Joe Tozer and the driving and technically demanding double bass playing and harmony vocals of John Breese.

The band has toured throughout the UK and Europe as well as appearing in North America, including being the first ever UK band to gain a highly sought after showcase spot at the International Bluegrass Music Association’s 2016 World of Bluegrass in Raleigh, North Carolina.

Winners of the 2015 Spiral Earth Award for Best Debut, the band followed up on the success of that EP by releasing their first full album, ‘Out of Mind’, in May 2016. Their latest album, 'Topspin', came out in June 2018 and has been described variously by reviewers as "thoroughly gorgeous", "striking", "a surprise and delight" and “an array of carefully crafted textures; often built on rich harmonic foundations, full of freshness and light.”

The band will be performing at the Seagull Theatre in Pakefield on Monday 3rd June as part of a short UK tour. Tickets are £12 (£11 concessions) and are available in person from the box office, by phone (01502 589726) and online at www.theseagull.co.uk/event/cardboard-fox/